Officers assigned to the uniform patrol force are the most visible faces of the Easthampton Police Department. Our officers are in the business of providing police service with the highest degree of professionalism. Every day our officers interact with the public, and our job is to do so with courtesy and compassion.

Our officers patrol the City of Easthampton twenty-four hours a day, seven days a week, operating marked as well as unmarked police vehicles. Additionally, officers may patrol on foot, on department-issued mountain bicycles or on the department's Kubota all-terrain vehicle. 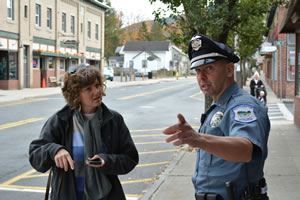 Patrol officers are responsible for the efficient performance of their required duties in conformance with the rules, regulations, procedures and policies of the Easthampton Police Department and the City of Easthampton. The duties of our patrol officers consist of, but are not limited to, a number of general police responsibilities necessary to the stability and safety of the community. Among those objectives, patrol officers are expected to:

Officers are responsible for familiarizing themselves with their assigned areas of patrol. This includes knowledge of residents, merchants and businesses. With regard to preventive and proactive patrols, an officer's duties include the enforcement of traffic laws and city ordinances, identification and assessment of public safety hazards, enforcement of criminal statutes, apprehension of wanted persons as well as vigilance for suspicious persons and any conditions tending to cause crime or indicative of criminal activity.

When criminal activity is afoot, the ultimate success or failure of our police efforts in the identification, apprehension and subsequent prosecution of criminal offenders is often based upon the immediate police response and investigation. The preliminary investigation is generally the responsibility of officers assigned to patrol duty who are nearly always the first police officers on the scene of a reported crime. The preliminary investigation should never be handled routinely, as it is not only a vital link in the criminal investigation process, but it can often be the means of uncovering information leading to the solution of other crimes or for initiating crime prevention procedures.

A Face of the Community

The uniformed officers of the Easthampton Police Department are the embodiment and face of the great community in which they serve. It is our goal to serve our community and its visitors with diligence and professionalism.