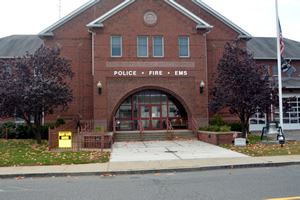 Easthampton was incorporated into a district on June 17, 1785, and in 1809 it was incorporated into a town. By the mid-1800s, the Town of Easthampton was protected by constables until the first police officers were hired in the 1870s. At that time, the police had only a prisoner cell block that was located in the basement of the town hall on Main Street. It was not until 1921 that an addition was built on the town hall to house the police department.

In 1925, the police department moved inside the town hall itself, where it was headquartered for over seventy years. Sharing the space with other town offices, the police occupied a portion of the first floor in addition to the basement cell block.

In the late 1990s, a state-of-the-art public safety complex was constructed on the parcel of the former Easthampton Rubber Thread Company. In 1999, the Easthampton Police and Fire Departments moved into the safety complex which is located at 32 Payson Avenue.

Early police cruisers were simply regular cars with a few limited modifications. Simple markings and the addition of lights were the only things that set most early police cars apart from regular cars. By mid-20th Century, auto manufacturers began offering vehicles with special option "police packages."

For a period, our department utilized Chevrolet's Caprice model for patrol cars. By the 1980s, a newly-designed Crown Victoria LTD was in production by Ford Motor Company. From the latter part of the 20th Century on, most of Easthampton Police Department's fleet consisted of Ford Crown Victoria sedans. Today only a couple of "Crown Vics" remain in our fleet, as Ford discontinued that model in 2012. Newly-designed "Police Interceptor" vehicles were introduced by Ford, and our department has integrated them into our current fleet.

As for the color scheme and markings on our police cruisers, that has evolved over the past few decades. For many years the department's cars were painted in a "blue and white" scheme, with department patch decals on the side doors and "police" decals on the trunk and front fenders.

In the late 1990s the cruiser color scheme, markings and design were changed. The cars were painted all white, with red "Easthampton Police" lettering on the side doors, and blue and red striped decals running along each side. The department motto "Community Committed" appeared under the "Easthampton Police" lettering on both sides, and the department's original web address was displayed on the rear bumper.

In the Fall of 2010, an initiative began in order to change the cruiser fleet to its current color and design scheme. A core group of officers and supervisors brainstormed the idea, and approached Chief McMahon with a plan to convert all of the marked cruisers to a new and improved design. The idea was to transition to a "black and white" color scheme with redesigned decals for a sharper image.

Hindered by fiscal constraints, the officers' plan would not have been possible without the generous assistance of local auto dealer Nicky D's in Easthampton. Upon hearing of the plan, shop owners Nicky and Betty Dupre offered to donate paint and labor to make the project a success. As the plan moved into action, a group of a dozen or so officers, coached by city mechanic Dennis Routhier, donated their time to strip and remove the existing decals on each marked cruiser using heat guns, solvent and elbow grease!

Once each cruiser was stripped and cleaned, it was repainted by Nicky D's in the black and white color scheme. New vehicle graphics and decals were then purchased with forfeiture money from narcotics investigations. The new design consisted of blue and black decals, including "Easthampton Police" lettered across the side doors, and a decal displaying the department patch affixed on each side of the cruiser.

Radar units are standard in each marked cruiser, allowing for both stationary and mobile speed measurement. Each cruiser has a digital mobile radio system that allows for interagency public safety communications. A variety of other equipment 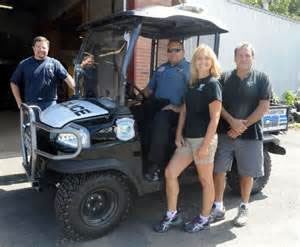 is also contained in each vehicle, from medical begs to protective equipment and rescue gear.

Other Types of Vehicles

In addition to utilizing the department's marked and unmarked police vehicles, officers may also patrol the city on foot, on department-issued mountain bicycles or on the department's Kubota all-terrain vehicle. The Police Department purchased a $15,000 Kubota rough terrain vehicle, or RTV, with money seized in drug raids and other drug enforcement activities the department participated in. Nicky D's Used Cars painted the RTV to resemble a police car for free, and city mechanic Dennis Routhier installed a siren and blue lights taken from an old cruiser.