History of the Easthampton Police Department

Much of the following information is credited to a report given by Easthampton Police Sergeant John W "Jack" Ramsey Jr. (1932 to 2013):

The History of the Easthampton Police Department dates back to 1856 when the Town of Easthampton was protected by Constables who made $3.08 per year. In 1869, prisoners were kept in cells that were located in the basement of the town hall. If a person was arrested they were brought into the town hall, locked in a cell, and given one cup of water. At that point, the town hall was locked up for the night and prisoners were left alone until the next morning. 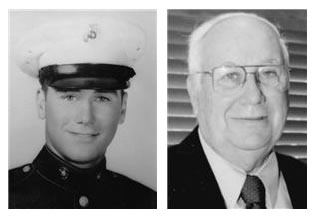 The Town of Easthampton named their first Chief of Police, Chief Buckner, and he served from 1899 until 1916. The first police station was located on Union Street on the second floor above a store named "Grant's." In 1911 the police department consisted of the following officers: Arthur Axtell, Frank Brothers, Charles Butterfield, David Carter, George Cook, Michael Corkery, Wim Chipman, and John Daley.

In 1914 Chief Buckner enacted the "red light system" and issued a letter reading, "I would like to take this opportunity to call the attention of the citizens of the town to our red light system. If an officer is needed, a telephone call to the central office or to the office of the Chief of Police will cause the red light to be shown and an officer should respond promptly, Chief Buckner." These red lights were located on Cottage Street, Union Street, Main Street, Pleasant Street, and Parsons Street. When a call was received the operator would flip a switch and all the red lights in town would come on and when the officer noticed that the lights were flashing, he would go over to the red light, open the box and pick up the phone to receive his call.

According to Sergeant Jack Ramsey, it was a requirement that the officer on duty had to check in with the station every hour by ringing one of the boxes. At that time the phone number for the police was "145." A person did not dial the number, but would tell the number to the operator on the other end. Sergeant Ramsey explained that throughout his investigations and raids on illegal gambling houses, the most commonly played number with the bookies in Easthampton was 145.

In 1917 the Easthampton Police Department purchased its first police vehicle. Prior to this, they shared one car with all the other town departments and they would have to request to use this one vehicle the night before.
Arrests for 1918 consisted of two for speeding, nineteen for track-walking, and one for the unlawful sale of wood.

In 1921 the first white-colored crosswalks were painted in town. The Easthampton Police Department also purchased its first motorcycle that year. A second motorcycle would be purchased by the police department in 1926.

An addition was built in the town hall in 1921 and the police operated out of this area from 1921 until 1925, when the police department moved into the town hall itself. The prisoner cells in 1921 consisted of four cells located in the center of the room, positioned back-to-back and separated by heavy metal plates. The prisoners had no running water or toilets in the cells. Instead they had a bucket with a cover which they used to relieve themselves.

From 1934 until 1945, James Campbell was the Chief of Police. In reading the notes of Chief Campbell, there was an interesting sentence which still holds true today. It read, "All the police department must have the cooperation of the public to make it a success." The police department in 1935 consisted of the following officers: 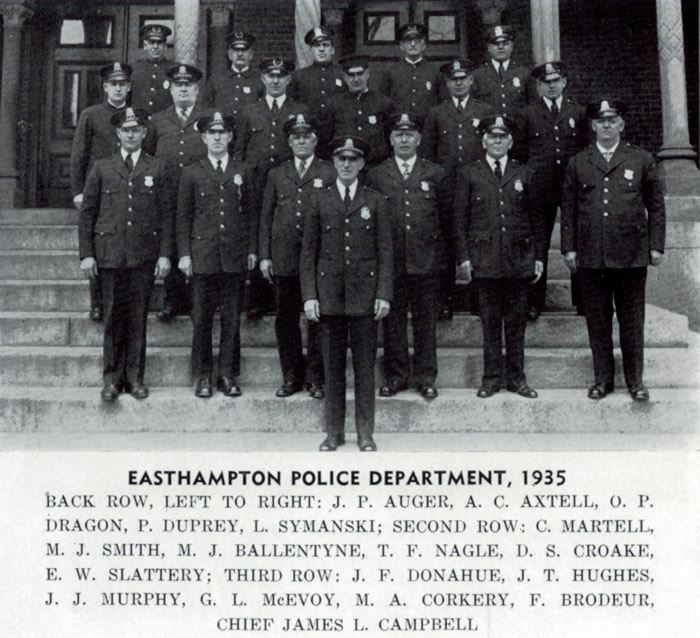 The first radios were only one-way radios, so the dispatcher would give out the call and hope and pray that the officer, if he was in the car at the time, heard the message. Then in 1945, two-way radios became available and in 1960 the Easthampton Police purchased their first "walkie-talkie" which was a "Motorola HT200." According to Sergeant Ramsey, when the police department received new radios, the old ones were given to the fire department, then to the highway department, and finally to the dog officer.

The Easthampton Police Department did not change its location in the old town hall from 1925 until 1999, when it moved into the current Public Safety Complex located at 32 Payson Avenue. This complex is shared by the police department and the fire department.